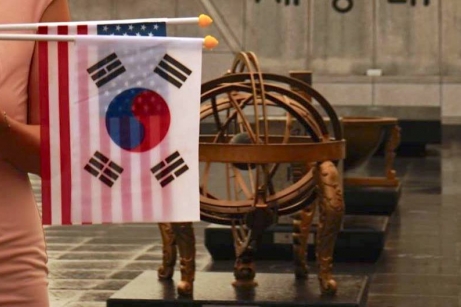 Mr. Lee is one of the millions of Koreans living in diaspora communities scattered throughout the United States. Historically, Korean Americans remained deeply connected to their ancestral homeland and have been actively involved in key social and political transitions in Korea during the 20th century. Korean Americans established many organizations in the US to support the March First Korean Independence Movement in 1919.  Mr. Lee is continuing in that tradition and has been actively involved in the One Korea Global Campaign, participating in many national and international conferences, with the most recent large gathering of international activists, civic and religious leaders and policy experts at the Global Peace Foundation’s (GPF) 2019 Global Peace Conference in Seoul.

Mr. Lee promoted the latest forum on Korean Reunification in an interview with Korean Radio. Hosted by GPF in New York City, the forum convened under the topic, “Seizing the Opportunity Toward Peaceful Korean Unification.” This is an excerpt from his dialogue with a reporter from Korean Radio:

Seong-re Lee: After the PyeongChang Olympics of 2018, President Moon Jae In held an inter-Korean summit at Panmunjom and shortly after, the North Korea-United States summit took place in Singapore. These events contributed to these countries having a more positive attitude toward peace.

Korean Radio: In this event for Korean Unification, Simjae Kwon, the representative of the National Assembly of the Republic in Foreign Affairs and Unification Committee, will give a keynote address, and In-Teck Seo, President of Global Peace Foundation-Korea and Co-Chair of Action for Korea United, will also give a presentation.

Seong-re Lee: Simjae Kwon, having served as the representative of the National Assembly of the Republic in Foreign Affairs and Unification Committee, has an accurate understanding of different government policies that take place on the Korean peninsula. As for chairman In-Teck Seo, I believe he will discuss the importance of peaceful Korean unification and enlist the support of overseas Koreans in advancing peaceful unification.

Korean Radio: After the successful Inter-Korean and the North Korea-United States Singapore summits, President Lee believes more encouraging discussions for establishing peace on the peninsula have emerged. President Lee asks for the support and participation of the Koreans in New Jersey for the upcoming event.

Mr. Lee is working in Los Angeles and New Jersey, home to the largest Korean diaspora communities in the United States, to reawaken the dream of a unified Korea in the hearts of Korean Americans. He hopes to inspire Korean Americans to become active participants in the One Korea Global Campaign and plans to bring a delegation to Seoul this August 14th and 15th for a GPF International Forum on One Korea coinciding with the National Liberation Day for Korea. The conference is dedicated to articulating actionable steps within the framework of the Korean Dream, a unique vision for a unified Korea.