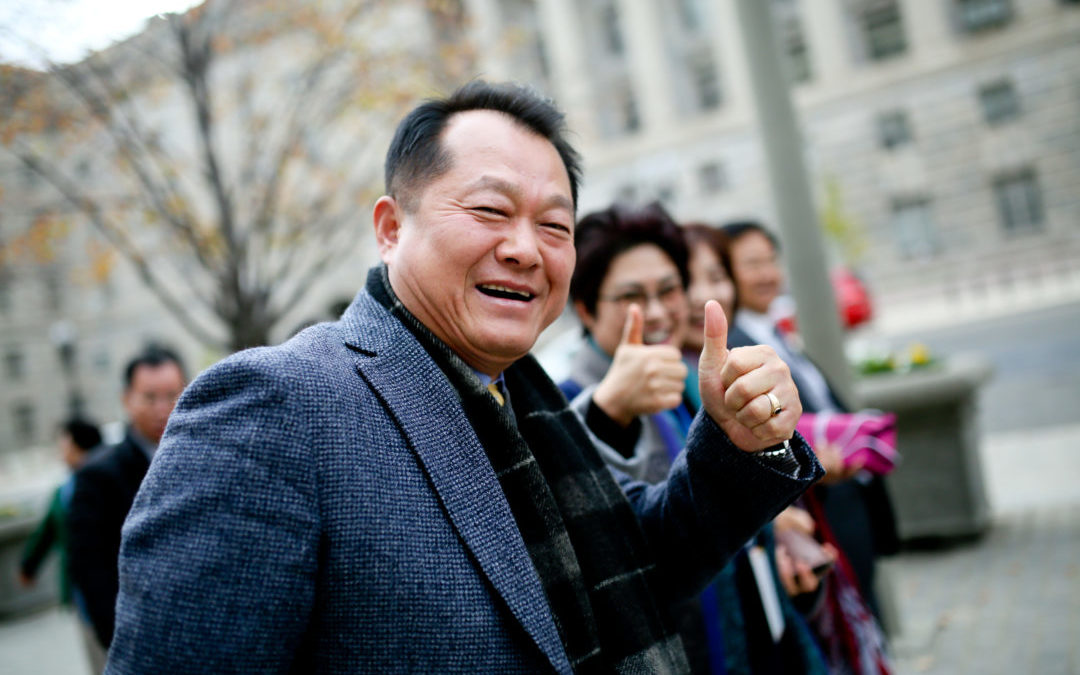 Dr. Hyun Jin Preston Moon, the founder of Global Peace Foundation, and the author of the book, “Korean Dream”, speaks in the International Forum on One Korea 2018.

WASHINGTON, December 13, 2019—Korea experts examined current events and opportunities presented for the unification of the Korean peninsula based on a shared history and heritage at a packed forum at the Carnegie Institution for Science in Washington on December 12.

Organized by the Global Peace Foundation and Alliance for Korea United, the forum, “Unified Korea: Strategic Framework for Resolving the Korean Peninsula Issue,” noted growing popular and political support for the unification process in South Korea, while also cautioning that unification is fraught with challenges that require both broad civil society engagement and international political resolve. 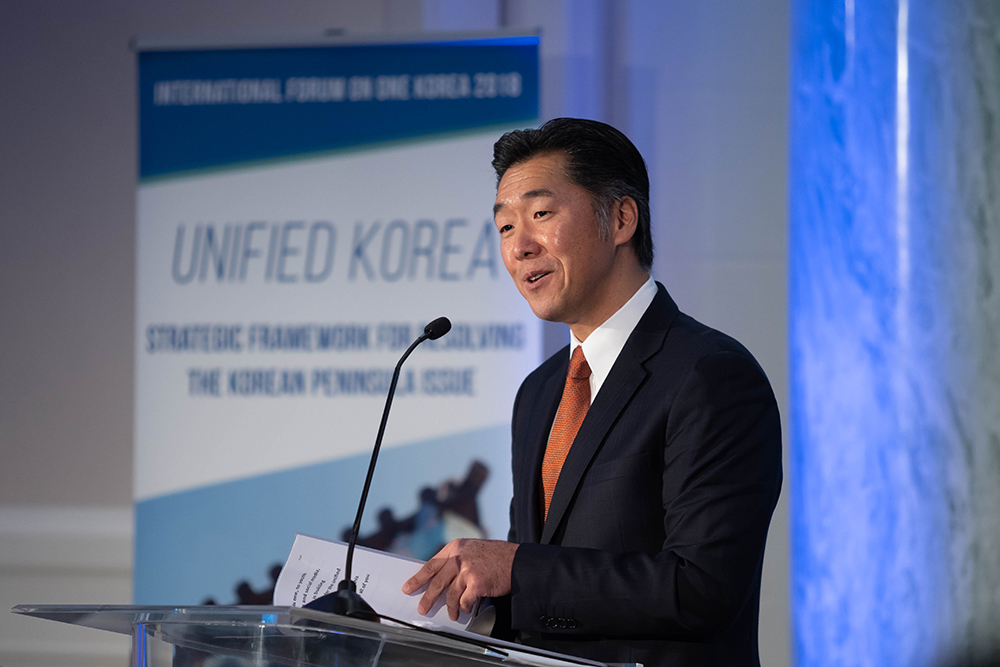 Global Peace Foundation Founder and Chairman Dr. Hyun Jin Preston Moon called on U.S. policymakers to embrace the idea of unification as a necessary strategic approach to denuclearizing the peninsula. Recalling the leadership of U.S. President George H.W. Bush and the process of German reunification, Moon said there were important lessons for Korea.

“One is the importance of a strategic policy that has a clear end goal in mind – unification – and works towards it steadily and systematically. Another is to recognize and wisely support the popular movements that are dynamic and vital ingredients for transformation.” The goal of a unified Korea “separate from the legacy of the Cold War and based upon Korea’s shared cultural history,” he said, is not the work of governments alone but required a broad civil society coalition.

Observing that the ancient ideal of Hongik Ingan, or “living for the greater benefit of humanity,” was a guiding principle for the March 1, 1919 Independence movement that united Koreans during the era of Japanese occupation, Moon said that “though unfulfilled at the time, that aspiration still burns in the hearts of all Koreans, North and South.” 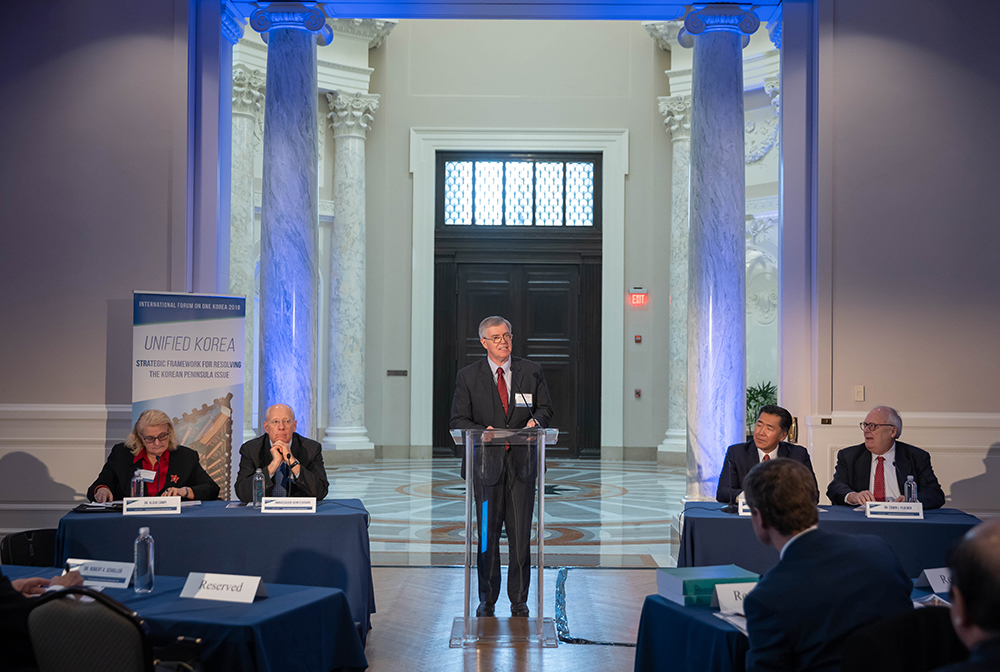 China-Mongolia specialist and former U.S. foreign service officer Alicia Campi said that small states who have modernized or made economic reforms can play an important role as intermediaries between the Koreas and in the unification process. Former Soviet states like Mongolia and Kazakhstan, she observed, have made peaceful political reforms while not surrendering their sovereignty to powerful neighboring countries, and present no threat.

Singapore, which hosted the recent Trump-Kim summit, has long-standing diplomatic relations with the DPRK, she noted, and the Philippines, despite being a close ally of the United States, is the third largest trading partner with North Korea. Campi described a “prism of cooperation” in areas such as disaster prevention, environmental management, transportation and energy which would “by definition lead to strengthening Korean peninsula unification momentum.” 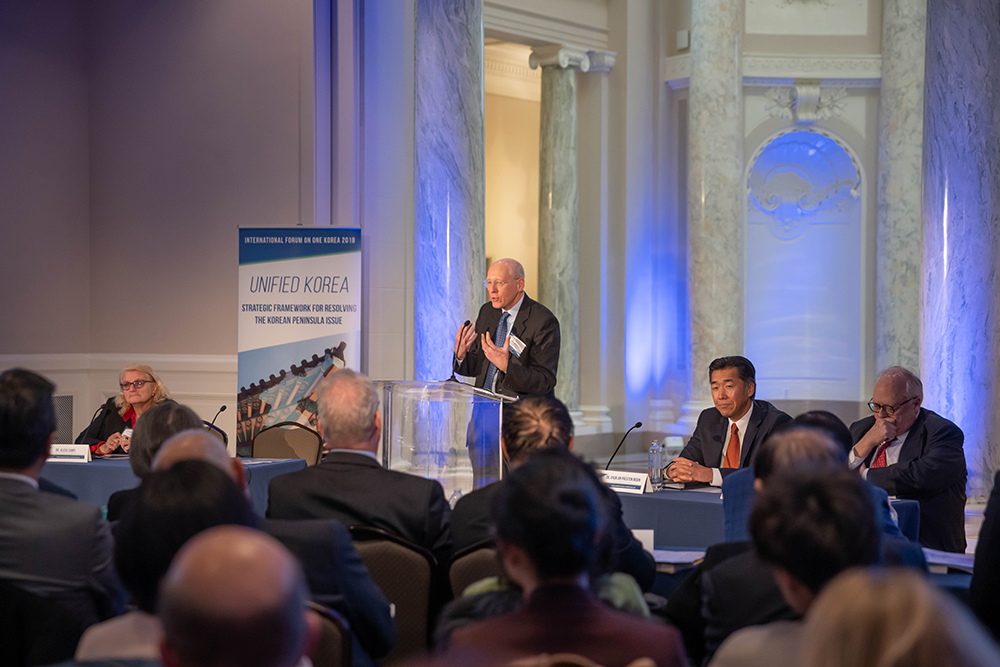 John Everard, a career British diplomat and former UK Ambassador to Democratic People’s Republic of Korea, warned that North Koreans have vastly different perspectives than the South or of most international observers, and that unification presents formidable challenges, including extreme cost, difficult integration of North Koreans with little experience of personal choices or responsibility, and enormous economic disparities.

Challenging the common view that North Korea is “full of people yearning to throw off the communist yoke,” Everard said “it is not like that at all. These are proud people [who are] proud to have taken their own destiny into their own hands, and that they have faced down the United States, Russia, and China.”

The former ambassador outlined four steps for realistically advancing unification of the two Koreas: Clarify the vision, how to get there, and how much it will cost; talk about plans with “difficult” stakeholders, notably China and Russia; wait for reactions. Be flexible. North Korea assuredly has a different idea about unification; and finally, seek involvement of the international community. 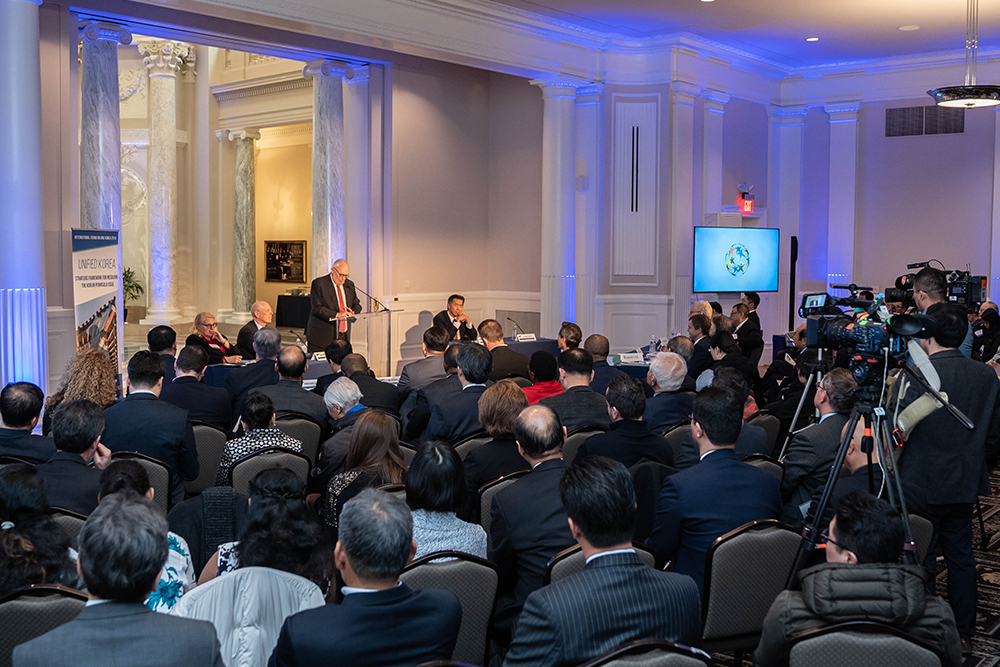 Heritage Foundation Founder Edwin Feulner credited the Trump administration with achieving progress through direct talks with the North, while saying that ties between the U.S. and South Korea were “as robust today as at any time.” Feulner stressed that the only path to peace was uncompromising commitment to denuclearization, while affirming the “vibrant power of civil society” to bring change and to further a peaceful unification process predicated on freedom.

Also addressing the forum, Ambassador Jaebum Kim, the Executive Vice Chairman of the Korean–American Association and a policy commissioner of the Korean Council on Foreign Relations, said that the focus of unification “rooted in the founding principles and cultural morals of the ancient Korean nation that bound Koreans as one people for millennia” has empathically heartened many Koreans to believe that unification is real and possible.

Ambassador Kim also recognized the critical role of the United States in South Korea’s history since the conclusion of World War II, including the “defense against communist aggression, armistice, economic development, national defense and democratization.” This role, he said, “remained essential in bringing about reconciliation with the northern half for ultimate reunification of the country.”

The forum organizers also announced the One Korea Global Campaign would commemorate the historic March 1, 1919 movement for Korean independence in Seoul from February 26-March 1, 2019. The program includes concerts, a Global Peace Summit, a conference of international scholars and policymakers, a documentary film, art and poetry competitions, and a culminating Centennial celebration in central Seoul.