2021 International Forum on One Korea 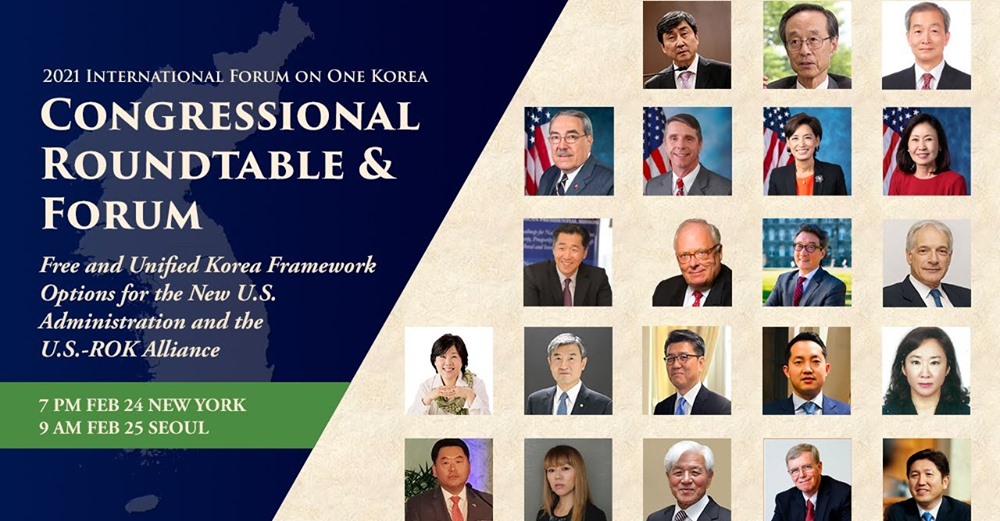 An exciting and timely forum took place on February 24th, co-convened by Global Peace Foundation, Alliance for Korea United USA and One Korea Foundation. Distinguished leaders and policy experts from the United States and South Korea came together via Zoom to discuss how the new US administration will approach the US-ROK alliance and its North Korea policy based on the framework of a free and unified Korea.

Roundtable on One Korea

The first track comprised of government leaders from the United States and South Korea. Despite standing on opposite sides of the political aisle in their respective countries, these leaders expressed their support for Korean unification, a reset in US-ROK relations, and denuclearization of the peninsula.

Deputy Whip and Congressman G.K. Butterfield affirmed strong support for the founding ideals of the Korean independence movement for “one free and indivisible Korea.”

Rep. Rob Wittman emphasized that human rights are endowed by God for the life, liberty, and pursuit of happiness of all people. He noted that these fundamental principles serve as the bedrock of not only the United States, but also the Republic of Korea.

Two of the first Korean American Congresswomen, Rep. Michelle Steele (left) and Rep. Young Kim (right), join the first 2021 International Forum on One Korea and called for Korean Americans to be included in the reunification of divided families.

Rep. Young Kim and Rep. Michelle Steel, focused on the human tragedy of division. They called for bipartisan efforts to allow Korean Americans to reunite with their loved ones in North Korea. Rep. Steel noted that both her parents were originally from North Korea and were unsuccessful in their attempts to meet their family members that still reside in the North. The two congresswomen from California are co-sponsoring the Divided Families Reunification Act, a bill authored by Rep. Grace Meng (D-NY) that urges the US government to help Korean Americans be included in the family reunion processes.

Current and former members of the Korean National Assembly, including Young-Kyo Seo, Taeyong Cho, and Jong-kul Lee, spoke to the principles and values that strengthen the US-ROK alliance as the basis for a unified Korea.

Hon. Young-Kyo Seo, member of the ruling Democratic Party, mentioned that South Korea is first among OECD countries in terms of economic growth rate. She attributed this economic success to the nation’s relationship with the United States.

Assemblyman Taeyong Cho, member of the People Power Party, stated how South Korea must prepare to face the threat from the North by maintaining a strong defensive position with support from the US. He also emphasized the need to take care of North Korean defectors and not tolerate the human rights violations “on our fellow Korean people.”

Hon. Jong-kul Lee, former floor leader of the Minjoo Party, expressed his view that all Koreans must come together based on shared values and aspirations that go beyond differing ideologies.

The second track hosted a panel of Korea policy experts. During this session, the speakers had an in-depth discussion on specific policy suggestions for the new US administration regarding its approach towards North Korea.

Dr. Victor Cha, Korea Chair at the Center for Strategic and International Studies (CSIS), and Ambassador Robert Gallucci, former chief negotiator for the US-DPRK Agreed Framework, affirmed the importance of the US to place human rights at the center of any talks with the North. Ambassador Gallucci stated, “The US is not going to have normal relations with a county that treats its own people the way the DPRK treats its own people.” In addition, Dr. Cha laid out a set of principles for President Biden’s Korea policy, including close cooperation with its allies, especially South Korea. 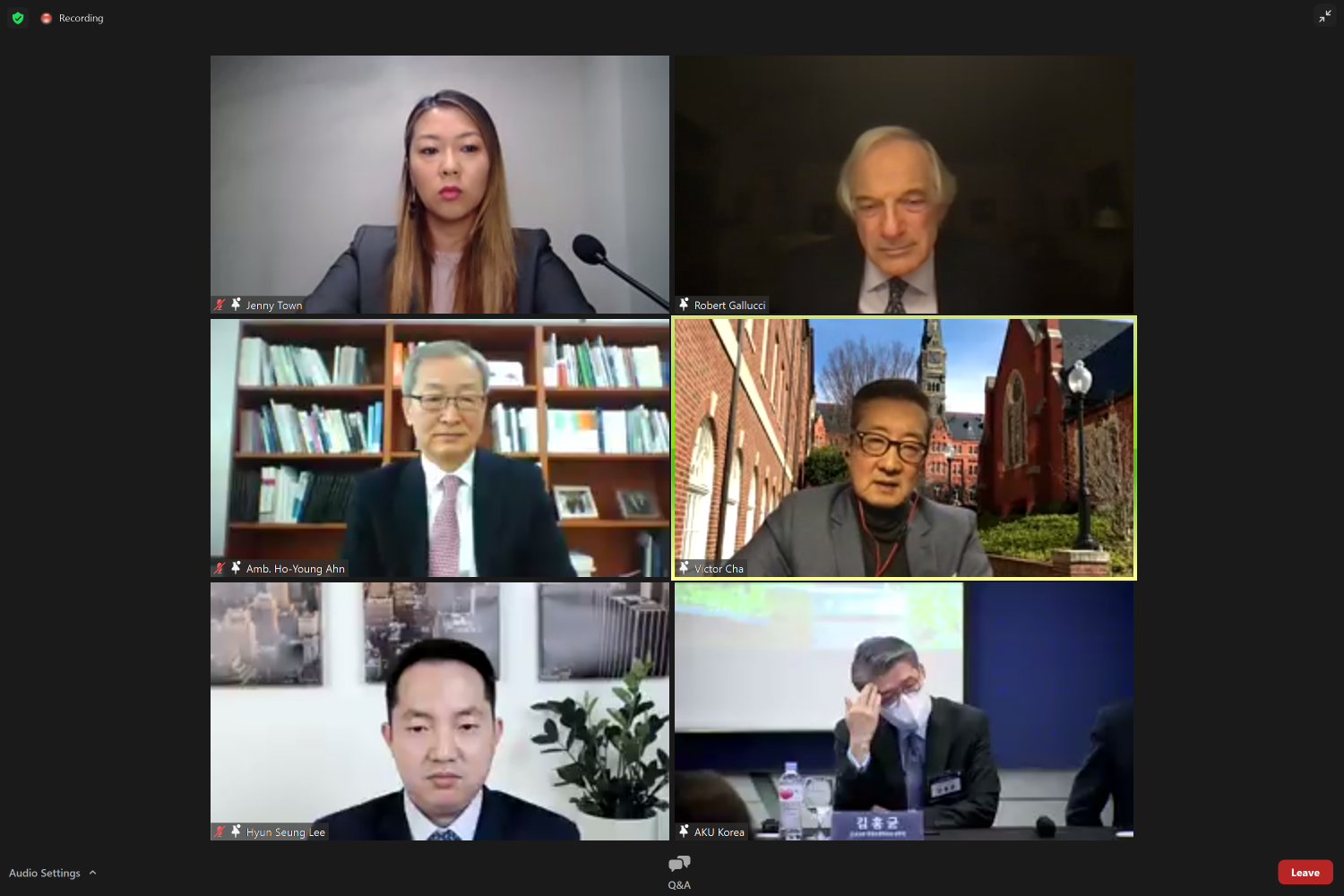 Policy experts called for the new US administration to reset its approach towards North Korea.

Ambassador Hong-kyun Kim, former Special Representative for Korean Peninsula Peace and Security Affairs, explained that South Korea no longer has the luxury to sit on the fence regarding President Moon’s approach to US policies in the Indo-Pacific. “What we need is strategic clarity, not strategic ambiguity.” He advised the Biden administration to invite South Korea to the Quadrilateral Security Dialogue (also known as ‘The Quad’).

North Korean defector Hyun-Seung Lee emphasized how the US and ROK must come to realize that the North Korean human rights issue is inseparable and critical to the issue of denuclearization.

To conclude the event, special remarks were given by Dr. Edwin Feulner, founder of the Heritage Foundation, and Dr. Hyun Jin P. Moon, chairman of the Global Peace Foundation and author of the Korean Dream: A Vision for a Unified Korea. Dr. Feulner believes it is our destiny to work together, on both sides of the Pacific, towards building a free and unified Korea. 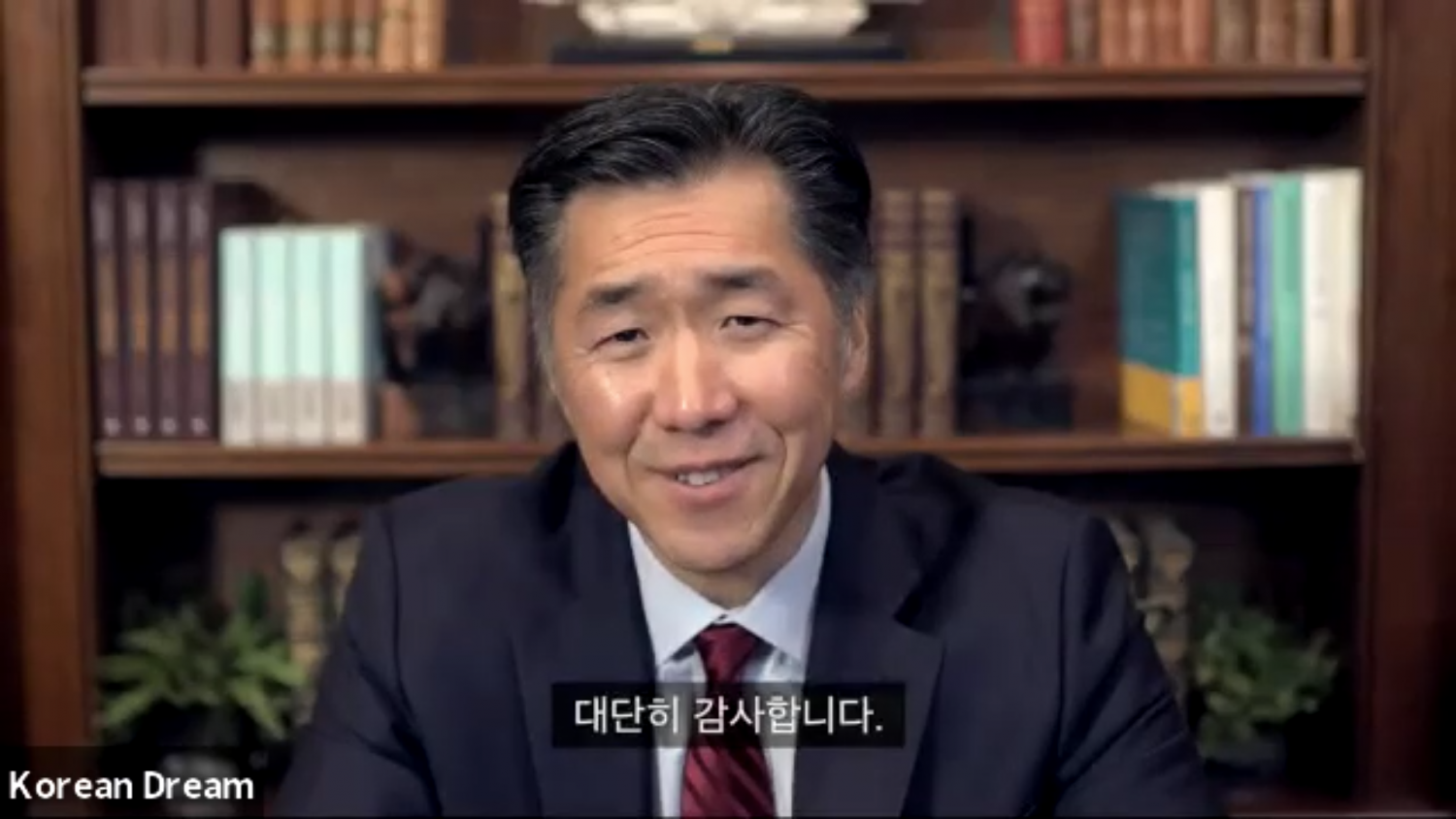 In his special remarks, Dr. Hyun Jin P. Moon urges all Koreans to be actively engaged in the unification efforts.

Dr. Moon stated that a unified Korea, rooted in fundamental freedoms and human rights, should become the actively pursued policy of the US and ROK. He believes that the path to a free and unified Korea must begin with the historic aspirations of the Korean people themselves. All Koreans, from the North, South and diaspora, should look to Korea’s founding spirit of Hongik Ingan, which means to ‘broadly benefit all humanity.’ He refers to this approach as the ‘Korean Dream.’

“With vision, leadership, and robust civic action, Korea’s historical quest for one free, independent sovereign nation can and will be a reality that is firmly within our reach.”